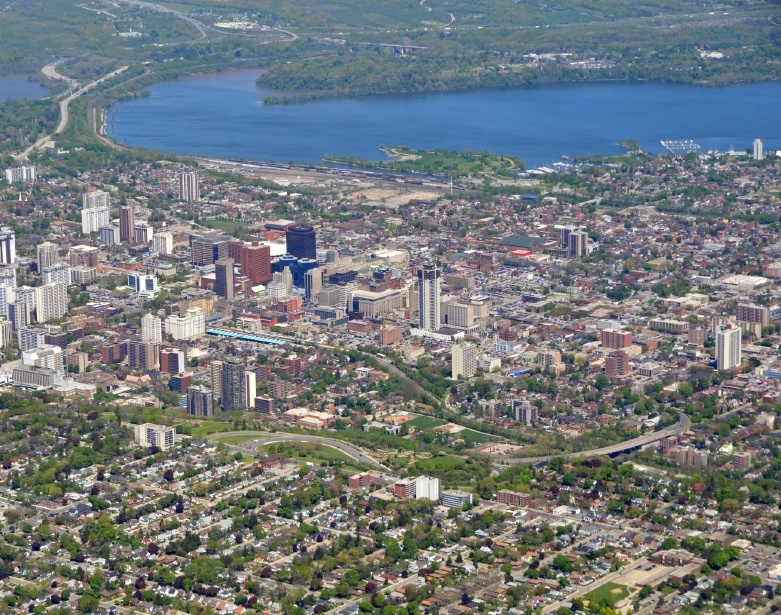 Real estate is much lower than Toronto

Residential properties in the city sell for much less than its GTA based neighbours, in April the average sale price of homes in Hamilton was $361. 711 compared to neighbour Burlington at $538, 867. Choosing to purchase a home in Hamilton can save people upwards of 50% of the cost of a Toronto home.

Office space in Hamilton is cheaper on average than its neighbours, consider that Class A office space leases at $27.17 per sq. ft. Property tax rates also run anywhere from $0.70 to a dollar less per sq. ft. than in Burlington and Oakville. Investors have begun to tap into office space potential in downtown Hamilton, as of 2014, vacancy rate was at 11.8%, Hamilton's lowest rate in the past five years.

Industrial space is also leased at lower amount than its neighbours, space averages out at $4 per sq. ft. The cities nine business parks provide strategic locations acorss the city to lease or buy property, as well as parcels development land. Vacany rates for industrial space in city is below the average of the GTA, in the future new industrial space will need to be developed to meet demand. There are a significant amount of employment lands available throughout the region, and like the commercial and residential sectors, incentives for development and redevelopment are available.

Industry magazines and real estate associations have repeatedly identified Hamilton as the top city in the country to invest in. That is, in part because of Hamilton’s strategic economic development plan which offers a number of incentive opportunities for investors and developers, I covered this extensively in my blog on the city's community improvement plans, click here to read. These incentives have lead to over $1 billion in building permit construction value over the past few years

Hamilton’s position along the Golden horseshoe corridor has allowed it to emerge as both a key commuter city and a key gateway for the shipment and goods movement. It’s proximity to Toronto, allows a 30 minute commute to a labour force of over 1 million. It’s position as a key goods movement hub is anchored access to the 400 series highway and international border crossing as well as a set of national rail lines. It is also home to John C Munro International airport, one of the country's largest courier and cargo airports and to the Port of Hamilton which is the busiest port on the Great Lakes.

The strength in Hamilton's ability to attract new development can be seen in the Downtown areas current 'renaissance'; as a number of new commercial and residential development are going up, and city-led revitalization projects are also planned in their support. Connect with me if you are looking for more information on the development advantages and opportunities within Hamilton.