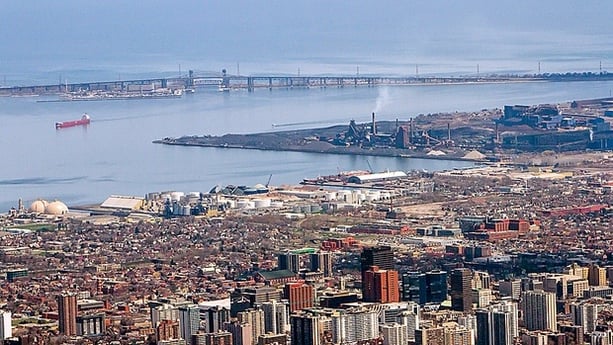 Hamilton is defined by steel and it was the strength of that industry that allowed the city to acquire a strong hold of heavy manufacturing giants. Then it was the rising dollar and changing economic winds that caused the loss of tens of thousands of jobs in the ‘steel’ town. The declining steel industry led Hamilton’s economic guiders to focus on diversifying the economy. While Hamilton’s industry has diversified to include agri-business, information technology, creative industries, life sciences and advanced manufacturing, the steel industry remains the number one economic driver. With the low loonie and strong U.S. economy demand is set to grow for the manufacturing dominated city, here’s how:

Food processing is a growing industry in Hamilton and with scare acreage available the Hamilton Port Authority is struggling to meet the demand for space. Agriculture based companies account for $200 million in investment in the Port over the past five years (12 new companies) and now only 27 acres land remain for development.  To meet demand moving forward, the Port is interested in 800 acres of bankruptcy protected U.S. Steels land. These new companies have doubled grain and fertilizer movement with numbers hitting close to 2 million tonnes.

Commercial development new to the Port:

According to the Hamilton authorities, IBM will announce a partnership with Hamilton Health Sciences in the near future. The partnership will see the tech company occupy six floors of the relatively empty Stelco Tower (26 storeys) at 100 King Street West in Jackson Square.

To read about Hamilton economic development updates from 2015 click here. And for more information on commercial real estate in Hamilton connect with me below.

Greg Chew specializes in industrial and commercial real estate sales in the Niagara-Hamilton corridor. He currently manages the Real Estate of over 1 million square feet of multi-tenanted commercial/industrial space in the Niagara Region for both National and Regional landlords. For further market insight on the city of Hamilton click here.